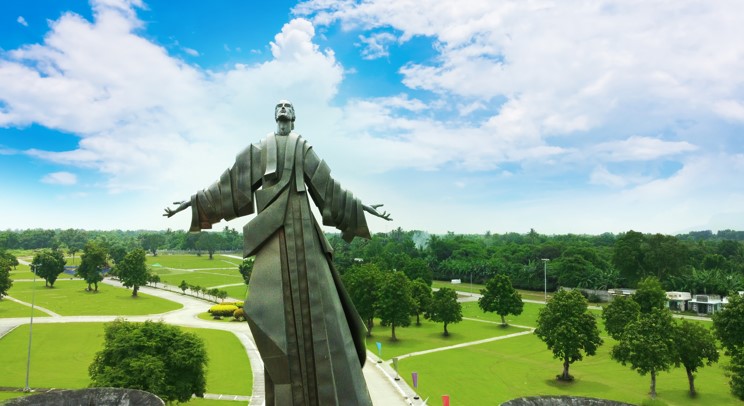 On its 46th year, Eternal Gardens continues to soar as a prime developer of first-class memorial parks in the country and a provider of top-quality memorial care products and services. Sticking to the vision of its founder, Ambassador Antonio L. Cabangon Chua, the company moves forward with purpose and passion to help Filipinos ease the pain of losing a loved one, and prepare for their family’s future needs.

Planting the seeds of compassionate service

It was his belief that every Filipino deserves a dignified final resting place that pushed Ambassador Cabangon Chua to establish a first-class memorial park in the Philippines back in 1976. The establishment of Eternal Gardens’ maiden park in Baesa, Caloocan City was met with many roadblocks because it was during a time when Filipinos were not receptive to the idea of buying a memorial plot before there is a need for one.

The prevailing mindset of Pinoys that purchasing a memorial lot ahead may attract death to the family, or could bring bad luck, added to the hurdles that Ambassador Cabangon Chua had to overcome when he started building Eternal Gardens. He also witnessed the struggles of the first Eternalite salesforce in trying to sell their memorial products. They were avoided and were given a cold shoulder for nobody wanted to spend money on something related to death.

These challenges would simply dishearten a businessman who is not ready to follow his vision. But abandoning his dream was not one of the options for Ambassador Cabangon Chua. Instead of being discouraged, he planted the seeds of compassionate service among the first generation of Eternalites, and nurtured them with diligence, focus, and the determination to succeed. Soon the seeds grew and resulted in a workforce made up of equally-passionate individuals who were not afraid to make things happen- a character that they were able to establish from the good example of the founder himself.

The first decade of Eternal Gardens proved to be a busy one, as three more parks followed the first one in Baesa. The Eternal Gardens branches in Dagupan City, Pangasinan; Biñan City, Laguna; and Balagtas in Batangas City were all established between 1976 and 1986, laying the groundwork for the Ambassador’s chain of first-class memorial parks.

The following decade was not as hectic for the company in terms of park development. Instead, the company concentrated on building up its resources and improving its services, focusing on learning new strategies to expand its reach and attract more clients. The fourth branch opened in 1992 in Lipa City, Batangas.

Two more Eternal Gardens parks opened during the third decade of the company’s operation, from 1996 to 2006. These were the branches in Naga City, the first in the Bicol Region; and in Cabanatuan City.

The expansion thrust of Eternal Gardens continues as plans for opening new parks in more locations are coming into a clearer view.  One of the company’s priority developments is located in Opol, Misamis Oriental, a municipality near the border of Cagayan de Oro. “Our priority project right now is the new park in Opol, because we only have few remaining inventory in our park in Cagayan de Oro, which is only about 10 km away,” said Eternal Gardens’ president and chief operating officer Numeriano B. Rodrin, adding that this new park aims to serve the company’s growing clientele in the region. Two more locations, one in Visayas and another in the Province of Batangas, are also being considered to be the homes of upcoming Eternal Gardens park developments.

As it continues to work on expanding its network of first-class memorial parks in the country, Eternal Gardens is also exerting extra effort to spread awareness of the benefits of preparing ahead for life’s contingencies.

According to D. Edgard A. Cabangon, Eternal Gardens’ chairman, this is in keeping with the mission started by Ambassador Cabangon Chua to reshape the outlook of Filipinos towards pre-need memorial planning so that they will see it as a necessary step to securing their family’s future needs.

“We continue to stay true to the vision of my father and Eternal Gardens’ founder and that is to be of service to our fellow Filipinos by providing them with excellent memorial service as a way of lightening the grief and burden of losing a loved one,” he stressed.

He added that in continuing his father’s legacy, it is also imperative that the whole organization maintains a high level of competence and proficiency. Constant communication among its members as well as continuing training, especially for the sales force, is a vital factor that must be at the top of the priorities of management. “I think that an open communication among us is very important so as to stay focused on our goals. That is why our weekly meetings are such an important ingredient in keeping up with the progress of each branch and to identify the areas that needs to be improved,” he added.